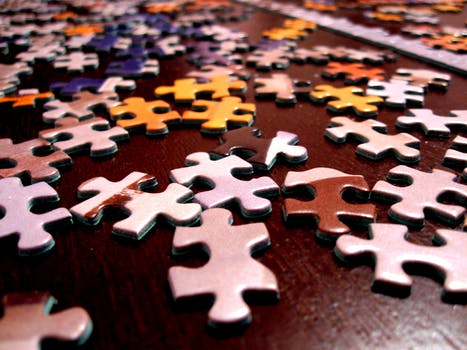 The Indian economy is like a large jigsaw puzzle. So many pieces come together every year, to deliver the GDP, now over $ 2 trillion per annum. However, we can say for sure that many pieces haven’t been fitted into their right slots in the puzzle and so the final picture is not the best that could be made. That is where the new, big startup opportunities will emerge.

The telecom industry showed us the power of the large, lower section of the population pyramid. The enthusiasm with which people took to telecom services surprised many, who didn’t really believe the interior markets and lower income segments would adopt so well. The private telecom players believed in the opportunity, invested well and offered products and services that could meet the needs of a wide range of consumer segments.

So much so that today the mobile phone is, in turn, becoming a basic tool in transforming many services for all sections of society.

With growing technological prowess and connectivity across segments, the Indian economy has the scope to deliver much more than the present 6% to 7%  GDP growth per annum. We are probably in the most exciting times as far as economic growth opportunities are concerned. But do we have a comprehensive strategy for growth which every one has bought into? Understanding the components of the GDP may help.

Let’s have a look at the GDP performance first.

After having maintained levels of 7% or more of annual growth rates for some quarters, the growth rate dropped in two consecutive quarters to below 7%. Alarm bells were rung and people of all hues (most without any understanding of the issues) got on to the bandwagon to make the most out of a doomsday scenario being painted.

The following two charts, sourced from tradingeconomics.com show what has been happening to the Indian GDP. 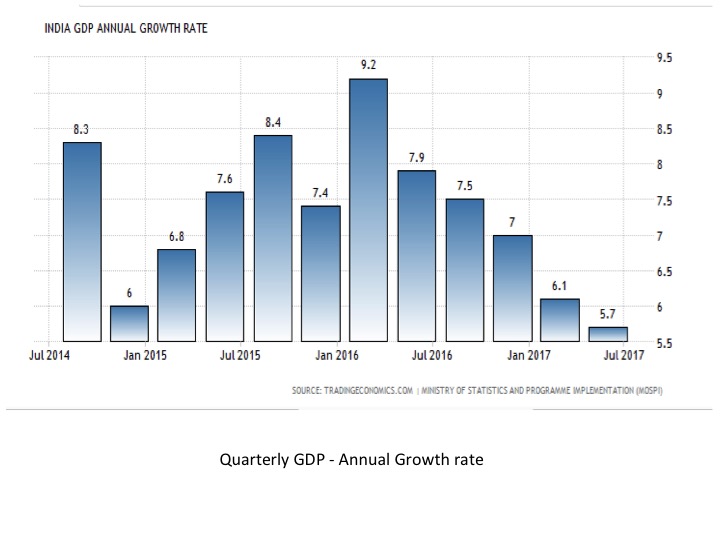 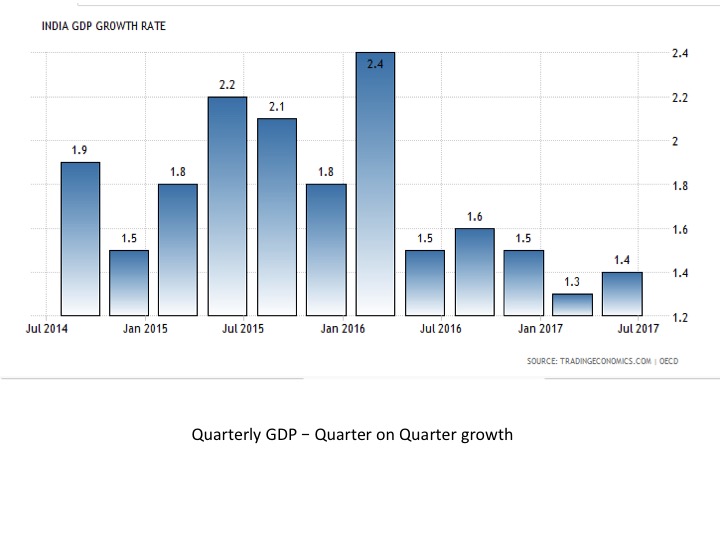 The first chart shows that in the quarter April-June 2017, the Indian economy grew at a rate of 5.7% over the same period in the previous year(April-June, 2016). Likewise, we can see the annual growth figure for each quarter.

The chart below is a simple analysis of the GDP performance, taking April-June (Q1) 2014 GDP as a base quarter with 100 units of GDP(for simplicity, avoiding $trillions or lacs of crores of Rupees). The learning from this table is

Yes, the demonetisation and GST effects are obviously there in the last two quarters. But common sense tells us that no business person is going to let go of a business, just because he or she has to align to a new tax regime or has to accept payments into a bank account, instead of cash. Likewise no consumer is going to stop consuming because the prices have gone up(and GST does not apply to essential goods)

The growth in electronic payments in those quarters and in the last one year is also clearly validating this.

The table clearly shows that, while the government’s initiatives and drive gave a boost in 2015, the tempo could not be maintained in 2016.

The reason would be the same as in any business scenario – high growths can be consistently maintained only if new segments, new markets and new sectors are penetrated. Existing segments tend to slow down as market saturation happens or effects of initiatives peak off.

Now let’s have a look at the sector wise contribution to GDP. At constant prices, the table above shows

In the last 15-20 years, growth has really come from the services sector – IT and Telecom stand out as the two obviously big ones. Sectors like automobiles, housing, FMCG, electronics, travel and entertainment sectors and many others, rode on this boom, thanks to liberalised policies, catering to the employees in these sectors.

Bengaluru is probably a great example of this boom, having moved from a population of 3 million in mid 90s to almost 10 million today. A large immigrant population found employment thanks to the IT sector growth, both within the sector as well as the other sectors mentioned above.

What is needed to fuel higher consumption and economic growth, is to give income growths to those in the lesser educated sections; those who are high school pass or plain graduates, living in smaller towns and rural areas or those employed there in agricuture or other sectors.

This growth need not necessarily come through jobs; it could happen by driving self employment in down stream areas.

The largest opportunity, logically, exists in sectors that employ a large number of people but are languishing in growth rates.

The ideal way is for technology professionals to team up with sector professionals, to plan startups that can exploit this potential.

Two large areas where the private sector can play the role of the growth stimulant are Agriculture and Manufacturing.

A sector that has been stagnant for years together and still dependent on rainfall to decide its fortunes. Penetrating this sector with suitable technology and prediction capabilities can help bring efficiencies for farmers as well as to businesses which buy farm produce. This sector contributes $260 bn, 15% of the GDP and grew at just about 4% in 2016-17.

While various agencies are working to support this sector, what’s really lacking is the entrprenuerial zeal and innovation. This sector is a great opportunity for startups, not just in Agritech but also in support sectors such as financial services, e-commerce and exports.

Some startups have already jumped into the fray and have shown commendable models for some of the above aspects. Scaling up fast is what will make the impact.

There was a time in the 60s and 70s when import substitution was the norm; the government would decide whom to license and whom not to; and manufacturers would give us shoddy goods as substitutes for imports. Today, there is no licensing for most manufacturing industries; and Make in India is a favoured idea.

Manufacturing today, is at about $300 bn value, grew at about 7% and contributed just 18% of the GDP in 2016-17. On the other hand, at $60 bn per annum, imports from China are huge and show us what all the Indian consumers and industry, are happy to buy; so the market is already there.

Import substitution needs some study and application of thought. While the mass production capability of China gives some standard features at the best price, local production could make smaller production runs but aim to create differentiation for more discerning and premium customers.

These could be in aspects such as

Agriculture and Manufacturing sectors have the opportunity of

What is needed is (a) an appreciation of what these sectors can do for the economy and (b) entrepreneurs and investors, who are willing to do a deep dive here. 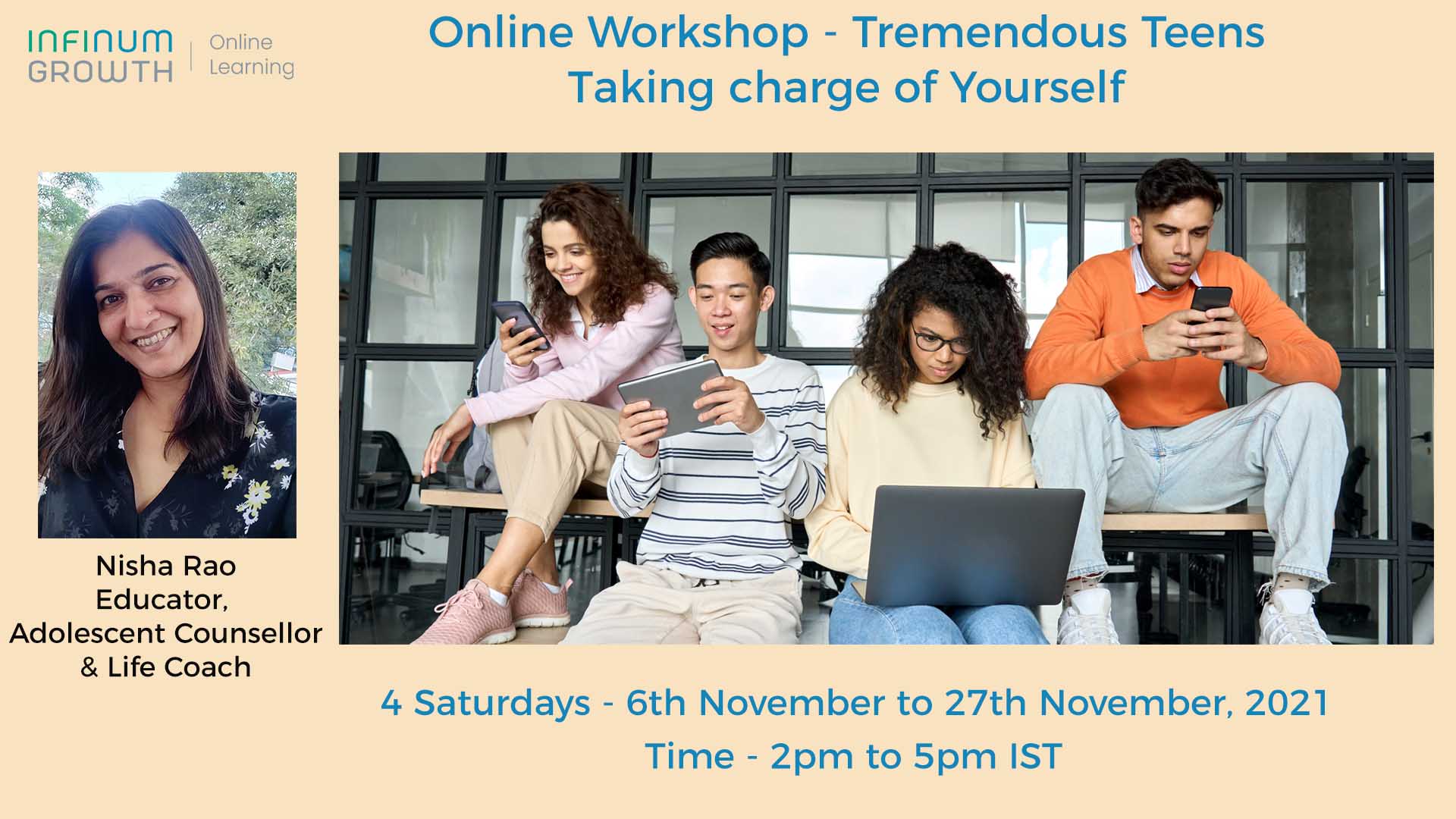 Excellent and exhaustive article. The approach is very matured. We need some more informative articles like this.