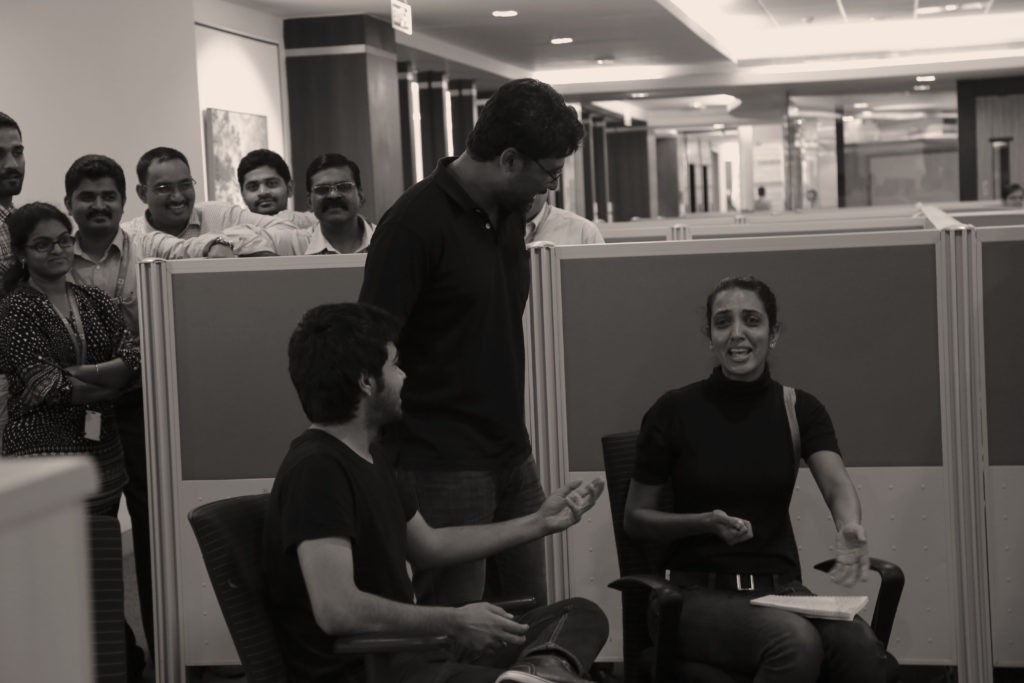 Dramanon (short for Dramatist Anonymous) is a theatre repertory based out of 3 cities that supports original writing, stages theatre productions and uses theatre tools for training and awareness.
It has now launched a unique effort in conducting workshops at Corporates where specific Learning & Development messages are delivered in a theatre format.

The Beginning – An Amateur theatre group
Dramanon was founded at the turn of this century by Mr. Ramakrishna Shenoy and the late Mr. Chandan Shatapathy – both former faculty members at the Manipal Academy of Higher Education (MAHE), Manipal.
Their founding vision was to address the need for a common platform where the diverse student body of Manipal could meet to commune, express and share.Through varied pursuits – play reading, acting workshops, script writing workshops and performances, Dramanon grew organically into an informal, unofficial, amateur theatre group that brought the students and faculty members of MAHE together in a creative endeavour.

In 2006, the student alumni of Dramanon, Manipal helped Dramanon spread its wings by establishing a chapter in Bangalore and subsequently, when Mr. Ramakrishna Shenoy moved to Hyderabad, another chapter was added there in 2007.

Today, Dramanon operates out of these 3 cities and since its inception has staged 30 full length theatre productions and more than 150 shows both nationally and internationally.
While box-office collections and corporate sponsorships were able to support our production related expenses, they couldn’t support a professional career in theatre. The modus operandi was to have a day job that would take care of the monthly bills and rehearsals running late into the night for theatre productions.

Going Professional
However all of this was set to change in 2010. A few of us from Dramanon in Bangalore decided to turn professional. And with it, came the added responsibility of trying to develop a business model that would solely be around our theatre related work.

First Steps
One of our early ideas was to do supper theatre which was emerging as a popular format and most star hotels in Bangalore were excited with this idea. With professional actors on stage and an evening of fine dining, this format became an instant hit. However, we realised that it was not creatively satisfying, and we took a call on ending this business model, despite its popularity.

Change of game plan
Theatre is essentially a team game – it requires every individual in the production be it the cast or crew to have a strong sense of trust, empathy and collaboration. As theatre practitioners we devise several exercises to hone these skills for our stage work.
We felt that these exercises had the potential to build strong bonds within a team that could be from anywhere – be it the IT industry or a manufacturing facility or a bank.

Theatre for Corporate Learning & Development
We designed our team building workshop that used theatre based tools to address the specific needs of corporates and initially started off by conducting free demo sessions at several corporates. The response to these workshops was very positive and very soon we had enquiries coming in for paid workshops from several industry verticals. Most of our participants found these workshops to be interactive, innovative and great fun!

People often say that more often than not you never see the things that are right in front of you. We felt the same when one of our clients asked us if we could develop a performance that is customised to deliver a specific message to their audience.

Our eyes opened up; aren’t we supposed to be script writers and performers as well?

This experience made us realise the huge potential of using performance for communication and learning. Every client had a unique requirement for these customised performances and hence our starting point is always to understand the organisation’s culture, then develop scripts that spoke their language and eventually design performances that would hold a mirror to them.

A majority of our theatre based learning and development programs have focused on diversity and inclusion, leadership attributes, prevention of sexual harassment at the workplace, ethics and compliance and key HR policies.

Way ahead
A few of our clients wanted us to scale the impact of these performances and help transport them to far away office locations – which organically led us to producing corporate films as well.
In parallel, we have also found new ways to financially support our theatre productions. Over the last few years, we have received several theatre grants and scholarships from funding organisations that are committed to supporting theatre productions based on original work.

Everyday at Dramanon, we continue to discover theatre and with it the craft of doing business.

Disclaimer: This article is based on the author’s personal experience as one of the core members of Dramanon, Bangalore. It does not represent the official view of Dramanon Theatre.